The ceremony began with the entrance of the University Council, the President of University, the Board of Trustees of the Cihan Universities, and a moment of silence to show respect to the pure souls of the martyrs. Subsequently, some verses of the Holy Quran were read.

3,038 graduates from 18 Departments will be given graduation certificates

After welcoming all the attendees of the ceremony, Prof. Dr. Amjad Saber Al-Delawi, president of Cihan University-Erbil revealed the number of graduates of the university in his speech. He added “as we know, the Kurdistan Region, like all countries of the world, has faced a severe crisis so most scientific activities, seminars and meetings were suspended, but fortunately today Cihan University-Erbil gives graduation certificates to 3,038 in 18 different departments for the academic years 2018-2019, 2019-2020, and 2020-2021. Our graduates will enrich the society with their knowledge.”

In another part of his speech, the president of Cihan University-Erbil told the graduates: “Dear graduates, today you will receive the outcome of your four years of study, and you will have a bachelor’s degree. I am happy to congratulate you warmly. I hope that you will faithfully serve your community that has provided any necessary facility for you for many years to help you get this day and celebrate it under the flag of the Kurdistan. On this occasion, we should emphasis the role of the lecturers who did not hesitate to convey the message of science, patriotism.”

Prof. Dr. Amjad Saber Al-Delawi devoted another part of his speech to the agenda of the development of Cihan University-Erbil. He explained that ” from the time of its establishment, the University has taken important steps at the local, national and international levels in order to expand the circle of its scientific and academic relations. Hence, the University has now become a member of many organizations, associations and unions, and has signed several agreements in academic fields for scientific and cultural cooperation to promote the scientific quality of the university. Our university has continuously attempted to develop the curriculum, to employ foreign and international lecturers, and to acquire the best lecturers of Kurdistan and Iraq for all departments of the university. At the same time, to develop our university’s research programs, we have opened several centers and counseling offices, which continuously conduct training courses by researchers for students. The centers include the Gender Center, the Research Center, Engineering Advisory Office, Cultural Center, Career Center, Language Center and ICDL Center which offer international certificates.”

During his speech, the president of Cihan University-Erbil mentioned the projects supported by the university aimed to serve the community, and said “Another main goal of Cihan University-Erbil is to serve different classes of society, raising the knowledge level of employees in different official sectors of government. For this purpose, the university has held various courses for different ministries, the Ministry of Peshmerga, the Teachers’ Union, Union of Scholars of the Kurdistan Region and many other fields. Moreover, the university has participated in several volunteering campaigns.”

To demonstrate the qualitative achievements of the university, Prof. Dr. Amjad Saber Al-Delawi reviewed some considerable scientific accomplishments of Cihan University-Erbil and stated “Our university has developed quantitatively and qualitatively and has taken important steps regarding enhancing the quality of learning. In doing so, the university has followed the decisions and guidelines of the Ministry of Higher Education and Scientific Research. At the international level, our university is continuing its efforts to practice and follow international standards of learning. The result of our latest efforts was achieving international accreditation from the most two famous European Accreditation Institutions #ASIC and #ZEVA, as well as obtaining “ISO” for all the administrative works of the university.”

Cihan Group is the chief supporter of Cihan University-Erbil

At the end of his speech, the president of Cihan University-Erbil expressed his gratitude to the Minister of Higher Education and Scientific Research and all the institutions of the ministry. Meanwhile, on behalf of the academic staff and   administrative staff of Cihan University-Erbil, he showed his special appreciation to Cihan Group and the head of the Group, Dr. Nawzad Yahya Bajager, as the founder of the University. Dr. Nawzad has played an active role in their continued support for the university to develop it more.

It’s important to have an academic certificate

In another part of the ceremony, Dr. Nawzad Yahya Bajger, chairman of board of trustees- Cihan Universities (Erbil, Suleymania, Duhok), delivered a speech. First, he welcomed the attendees and congratulated the graduates for obtaining a certificate demonstrating their knowledge which is important for their present and future status.  He mentioned the key role of having certificate in building the high life.

Cihan Universities has grand plans for the next 30 years

During his speech, Dr. Nawzad Yahya Bajger, chairman of board of trustees- Cihan Universities, brought up their Group’s agenda for the development of Cihan universities for the next 30 years. He announced that the strategy of the Cihan universities for the next 30 years (2021-2050) is highlighting the historical facts of Kurdistan and revealing those facts; reconstructing our present and future, planning and changing our future through using modern science, and getting familiar with modern technology.  He also stated that by planning for the future and conducting research, we can illuminate our future and know what we need and how to prepare ourselves for the future.

Graduates should have plans for their future for the graduates.

Addressing the graduates, Dr. Nawzad Yahya Bajagr said that Cihan University is a private university, created based on a private sector which gives the idea to the graduates to provide themselves with their own job, being their own employers. He recommended them to have plan and work for it, dedicate their knowledge, and have patience so they will be successful.  He also advised them to spread love and kindness, broaden their knowledge, dedicate their life to humanity, and not forget the Kurdistan, so we must work on ourselves to preserve Kurdistan. “In doing so, we are planning for our next 30 year to see our universities as the world’s leading universities, like Luxembourg University,” he said. In the end, he thanked everyone, especially the graduates, their parents, the Kurdistan Regional Government, parliament, lecturers, employees and students.

It is honorable that Cihan University-Erbil has gained international trust

A speech from the Ministry of Higher Education and Scientific Research, read by Dr. Amanj Abdullah Saeed, the ministry counselor, was another part of the graduation ceremony of Cihan University-Erbil. Dr. Amanj Abdullah Saeed on behalf Dr. Aram Mohammed Qadir, minister of higher education, congratulates the Cihan University-Erbil graduates and their families. He also extended his thanks to the president of Cihan University-Erbil, the Board of Trustees, and the lecturers of the university for equipped a new generation for our community. He continued that Cihan University-Erbil has taken some considerable steps, such as achieving international trust for its educational programs, as well as attaining international trust of institutions for the university, and he appreciated the university for these attempts. “We see these steps as great ones, and we ask them to have plans to receive accreditation for all of their programs in a way that no programs in the future left behind without an international approval.” he added.

In another part of his words, the representative of the Minister of Higher Education and Scientific Research mentioned the ministry’s outcomes in various fields, particularly on linking the educational programs to the job market. He also mentioned the ministry’s plans in their attempts to continue the reform process, to develop vocational education, and to provide equal opportunities for college students to study at public and private universities.

After that the representative of the graduates gave his speech, the ceremony ended with pledging professionalism occasion by whole graduates. In that occasion, by the request of the deans of the colleges (Law and International Relations, Science, Engineering, Arts and Letters, Education, Administration and Financial Sciences, Health Technology), by the words of the president of Cihan University-Erbil to credit the graduates, and legitimated by law, Bachelor’s Degrees were awarded to all graduates of Cihan University-Erbil.

The top graduates of the university were rewarded

The ceremony was ended by presenting awards to the top Cihan University-Erbil graduates that was distributed by the attended officials, as well as presenting a special award and medal to Professor Dr. Mahmoud Amin Abdullah for his appointment as one of the world’s best scholars.

Students of the General Education Department Visit the Cihan Institute 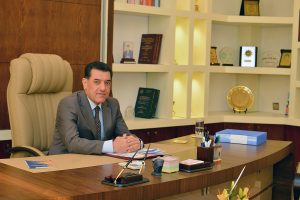 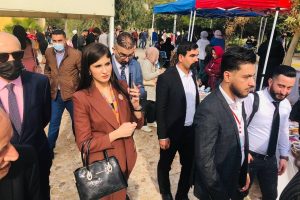 On the day of Elimination of violence against Women, Cihan University-Erbil announced ‘Enlightening Women Week’ 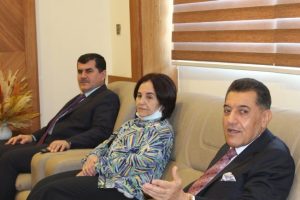 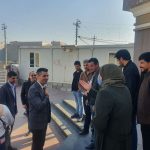 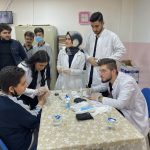